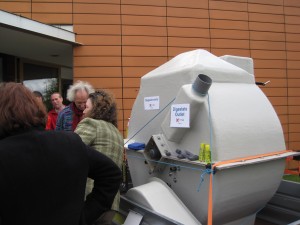 In spring 2012, Community Energy Warwickshire commissioned a study of the potential for generating energy from food waste in south Warwickshire. The study, which was funded by the Government’s LEAF fund, was carried out by a consortium led by Warwickshire-based renewable energy consultants Greenwatt and included specialists from the University of Southampton.

The research aimed to estimate the amount of food waste that might be available to generate energy through the process of anaerobic digestion (AD). In the AD process, food waste is broken down by bacteria – rather as green materials are broken down in a compost heap – to create methane and a residual digestate which can be used as a soil improver. The methane can be treated and piped into the national gas grid or burnt on site to produce heat and electricity.

With the help of Community Energy Warwickshire volunteers, the study found that enough food waste was generated by the tourist industry in Stratford upon Avon to support a moderate size AD plant. However, the ways in which waste is currently collected would make it very difficult to guarantee a consistent stream of food waste for the AD plant. The study pointed to a number of alternative ways in which food waste might be collected for use in an AD plant, but to date Community Energy Warwickshire has not been able to take these forward.

There has been considerable interest nationally in the possibility of community power generation using the AD process, but no successful pilots. Community Energy Warwickshire’s study helped to show some of the barriers to community-led AD plants and to suggest some ways in which these might be overcome.

Click here for a copy of the AD study report.